Hello everyone, today you can download Shotgun Farmers for Ubuntu and play a strangely unique and certainly fun indie action game. First of I must say the graphics on this game are not eye popping but they fit the time of game this is. A child friendly game that adults will enjoy as well.

Today we will highlight some reasons why you should go ahead and try Shotgun Farmers on your favorite Linux operating system. I downloaded the game yesterday when it was officially released and I must say, it is way better than I thought it would be when I looked at the screenshots. The gameplay is superb and fun. Like I mentioned earlier, this game is perfect for all ages and you can play it online with thousands of others players instantly. Shotgun Farmers also comes with many features including the ability to upgrade your character/farmer with new hats, clothes, weapons etc. You can also choose to play this interesting first person shooter by yourself as a game mode. Let me know in the comments what you think about this game.

What Is Shotgun Farmers About?

Shotgun Farmers is the first-person multiplayer shooter where missed shots grow guns. Reloading isn’t an option, so grab one of the deadly crops planted by earlier missed shots. Shot at by a sniper? Well they just planted you your very own sniper gun to fire back with! Harvest weapon plants quickly for more ammo or let them grow for a larger clip.

Play online with up to 10 players per match, in public lobbies and private password protected rooms. Looking to practice? Shotgun Farmers includes full bot integration so you can sharpen your farming skills offline against bots or team up with the AI to fill out your roster online.

Battle enemy farmers in different game modes that change the way you play. Chase a chicken around the map in Chicken Run, steal the enemy’s prized pig in Capture The Pig, defend the scarecrow in King of the Crow, and more.

Level up your farmer and complete challenges to unlock over 100 cosmetics, including hats, shovel skins, costumes, and emotes. 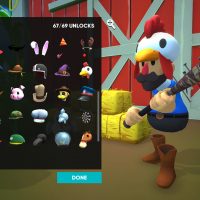 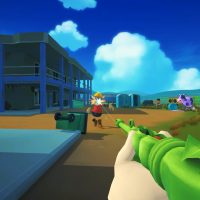 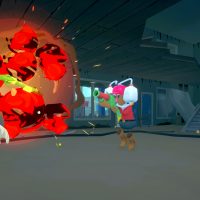 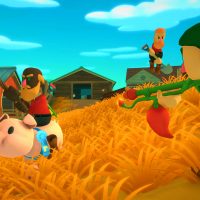 Other Linux games: Shadow of the Tomb Raider for Ubuntu, Tropico 6 for Ubuntu, Minecraft for Ubuntu & Counter-Strike GO: for Ubuntu