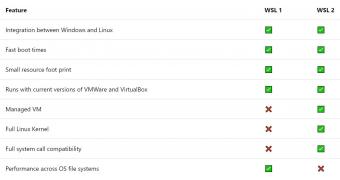 One of the biggest changes in Windows 10 version 2004, or May 2020 Update, is the addition of the second-generation Windows Subsystem for Linux, also known as WSL 2.

Needless to say, WSL 2 comes with massive improvements, and one of the most notable is a full Linux kernel. Furthermore, this new release also supports managed VMs and allows for full system call compatibility, something that wasn’t available on the first Windows Subsystem for Linux release.

At the same time, WSL 2 also offers faster performance, and while Microsoft recommends everyone to switch to this new release, the company explains that some might have to stick with the original Windows Subsystem for Linux if the project files must be stored in the Windows file system.

However, the full Linux kernel that is available in WSL 2 is what makes most people upgrade. Microsoft itself ships new updates for the kernel via Windows Update, so the whole experience is substantially improved for those on Windo… (read more)