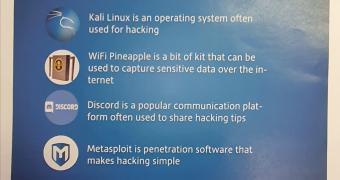 A poster created by the West Midlands Regional Organised Crime Unit (WMROCU) and also featuring the logo of UK’s National Crime Agency (NCA) warns that the kids using software like Tor Browser, Kali Linux, Discover, and Metasploit could be the next-generation hackers.

The warning was published online by Twitter user G_IW and obviously generated an avalanche of reactions from the WWW, many of which criticized the British police for what they consider to be disinformation.

“If you see any of these on their computer, or have ea child you think is hacking, let us know so we can give advice and engage them into positive diversions,” the warning reads.

The team behind Kali Linux, a Linux distribution that’s mostly supposed to be used for penetration… (read more)