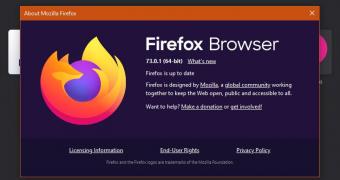 Mozilla has recently released the first minor update for Firefox 73, this time bringing important fixes for Windows and Linux systems running the browser.

With this update, Firefox reaches version 73.0.1, and the most notable improvement concerns Linux devices.

According to the official release notes (embedded at the end of the article), this new update fixes crashes experienced on some Linux systems when playing encrypted content.

The issue was first listed on Bugzilla, Mozilla’s bug-tracking system, on February 10, and was confirmed in all modern Linux distros. Furthermore, rolling-release distros were also said to be affected, including Arch and Fedora, all of them eventually failing to play DRM media, as noted in the bug report.

Windows users are also getting their own share of patches in this new Firefox update, including a bug fix specifically supposed … (read more)