Running Windows 95 on Linux, Mac, and Windows 10 Just Got a Lot Better 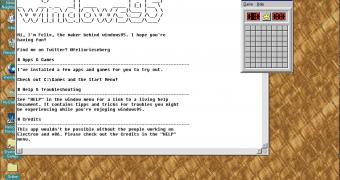 Windows95 v2.0 saw the light of day earlier this week and it appears to be the biggest update to the application since its initial launch in August 2018. The new release introduces support for sound, better support for HiDPI/4K displays, as well as the ability to “reset” a machine, according to the developer.

Furthermore, it looks like the Windows95 v2.0 release is even bundled with a few video games so you won’t get bored while you’re trying the old Microsoft Windows 95 experience on your Linux, Mac, or Windows 10 computer. Among these, we can mention A-10 Tank Killer, Doom, Wolfenstein 3D, and Grand Prix Circuit.

The new game selection included in the Windows95 v2.0 release is accompanied by a few old school apps… (read more)