Hello everyone, you can download Transport Fever 2 for Ubuntu and play one of the best simulation and strategy games available for Linux. Somehow it still feels like its going under the radar.

Today we will highlight some reasons why we think you should check out Transport Fever 2 on your Linux OS. I have been playing this awesome city-builder type game for the past couple of weeks and it is much more fun than I originally thought it would be. I literally play it at least an hour or so daily. It has so much things to do and if you like games that push your creativity button, this is one game you cannot afford to miss. Transport fever 2 was published by Good Shepherd Entertainment and developed by Urban Games. Both companies are talented and their track records prove it. The graphics in the game are what pulled me in at first but the gameplay is what has kept me playing. You can make unique infrastructure for the air, land and water. The game continues to grow thanks to the Steam Transport Fever 2 modding community, you will find tons of fun mods to make the game feel fresh and new. With that said, let us know in the comments what you think about this game once you decide to try it.

What Is Transport Fever 2 Game About?

Transport Fever 2 sets a new standard with its classic transport simulation feel while adding many new options to make this game exciting and fun. Discover a whole new world by navigating transport routes through land, water and air.

Provide the world with the transport infrastructure it needs and make a fortune with custom-made transport services. Watch your trains run on rails, your buses and trucks thunder along roads, your ships power through the water, and your planes soar through the skies.

Carry people on their way to work or play, and be the reason cities grow and thrive. Deliver raw materials and goods to drive the economy. Experience the greatest logistical challenges from 1850 to the present day, and build a transport empire unrivaled anywhere else on the globe!

Free play offers a huge range of creative possibilities, while campaign mode re-writes transport history across three continents. Transport Fever 2 offers a choice of over 200 vehicles from Europe, America and Asia, modeled in extreme detail; and with the in-game map editor, you can re-create landscapes from three different climate zones.

Finally, the realistic transport and economy simulator, along with comprehensive modding support, round off the gameplay experience. 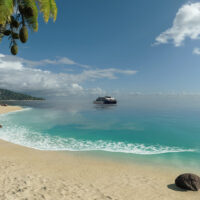 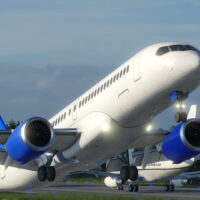 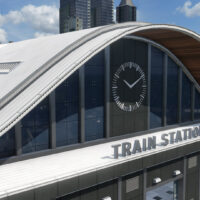 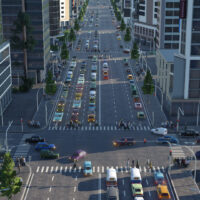