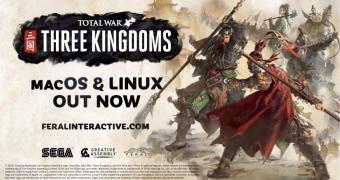 Developed by Creative Assembly and published by SEGA, the Total War: Three Kingdoms video game was actually launched today, May 23rd, 2019, for Microsoft Windows, but Feral Interactive made it possible to sync their Linux and Mac ports with the Window release, so you can play it on your favorite platform.

As its name suggests, the game is set in the Three Kingdoms period, where players will have to control one of the twelve legendary Warlords in their attempt to eliminate other factions and unify China. The goal of the Total War: Three Kingdoms video game is to become the ultimate ruler of the kingdom.

“The year is AD 190. China, a great but fractured country, calls out for new leadership. Now is the time to unit… (read more)