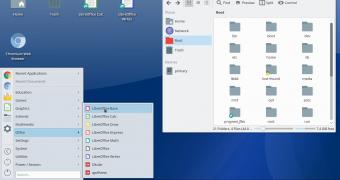 The Q4OS team announced the released of the Q4OS 3.8 “Centaurus” Linux and Debian-based computer operating system, a major version that adds many new features and improvements.

Based on the recently released Debian GNU/Linux 10 “Buster” operating system series, Q4OS 3.8 “Centaurus” comes more than seven months after the Q4OS 2.7 “Scorpion” release and it is the first stable version in the 3.x series, which was in heavy development during the last few years.

For a long time, Q4OS was shipping with the Trinity Desktop Environment (TDE) by default, which offers users, especially those who want to switch from Windows to Linux, a very familiar interface. However, it looks like the Q4OS 3.8 “Centaurus” series uses the latest stable KDE Plasma desktop by default.

“One of the Q4OS specific goals is the ability to have Plasma and Trinity desktop alongside each other installed,” explain the developers. “Plasma is being… (read more)