Microsoft Teams for Linux Could Soon Be a Real Thing 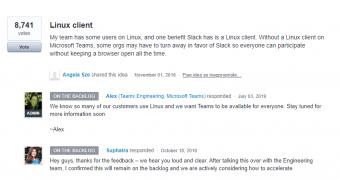 Microsoft might launch a Linux version of Microsoft Teams at some point in the future, according to company engineers working on the project.

Microsoft Teams is already available on the most popular platforms out there, including Windows, macOS, Android, and iOS, and given the software giant’s push towards the Linux world, such a release perfectly aligns with its long-term plans.

A thread on UserVoice, Microsoft’s feedback platform, discusses the chances of getting a Linux version of Microsoft Teams, with the post having nearly 9,000 upvotes from users, as per a tweet from @unixterminal.

“My team has some users on Linux, and one benefit Slack has is a Linux client. Without a Linux client on Microsoft Teams, some orgs may have to turn away in favor of Slack, so everyone can participate without keeping a browser open all the time,” the original feature suggestion reads.