Hello everyone, how are you all doing? Any of you heard of the crazy cooking game known as Overcooked! 2? It was just released less than a week ago, on the 7th of August officially on Steam and so far it has ‘mostly positive’ reviews according to the people who have bought and played it like myself. I like it so far and I hear we are due for some more updates and bug fixes in the coming weeks.

This is not your usual cooking game, Overlooked 2 for Linux actually allows you to play with other people online as you try to solve all kind of crazy cooking problems. You can choose to work with others or back stab them and get all the cooking glory as the best chef to yourself. Let’s find out what makes Overlooked 2 one of the most popular games right now for us Linux gamers.

What Is Overcooked 2 Game About?

Overcooked 2 returns with a brand-new helping of chaotic cooking action! Journey back to the Onion Kingdom and assemble your team of chefs in classic couch co-op or online play for up to four players. Hold onto your aprons, it’s time to save the world. You’ve saved the world from the Ever Peckish. Now a new threat has arisen and it’s time to get back in the kitchen to stave off the hunger of The Unbread!

Travel through teleporters, across moving platforms and save time by throwing ingredients across dynamic kitchens that shift and evolve. Some kitchens even whisk your chefs away to new locations.

You’ll knead to work together (or against each other) to get the highest score in chaotic local and online multiplayer.

Journey across a brand new overworld map by land, sea and air. Get cooking in new themes ranging from sushi restaurants, magic schools, mines and even alien planets!

Travel the land cooking up a range of new recipes that are sure to cater to any tastes, including sushi, cakes, burgers and pizzas. 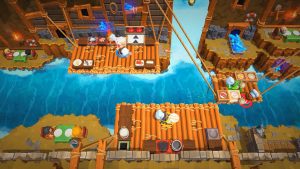 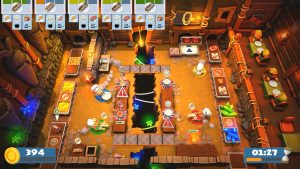 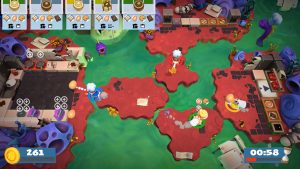 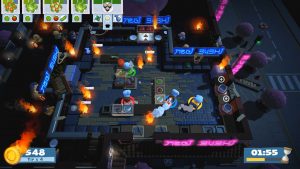 Today’s Popular Linux Article: Download Life Is Strange: Before the Storm For Ubuntu