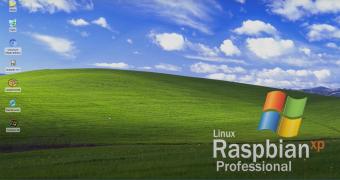 Windows XP still has millions of fans across the world despite being killed off some six years ago, but this doesn’t necessarily mean everyone is ready to let it go.

And while running Windows XP these days is no longer a good idea from a security perspective, you can actually get a taste of the 2001 operating system with a Linux operating system that comes with its key features, including visual elements that reproduce its interface.

Called RasbianXP, the Linux-based Windows XP is actually an operating system that’s specifically aimed at Raspberry Pi, so it can be installed on the little board quite easily.

More impressively, RasbianXP can even run Windows software, obviously with an emulator, but you really shouldn’t get your hopes too high if you’re thinking to switch to it and use applications like Photoshop. It goes without saying that the hardware resources here are very limited, so you should be fine as long as you stick to the basics,