GParted 1.1 Open-Source Partition Editor Is Out with Various Enhancements, Fixes 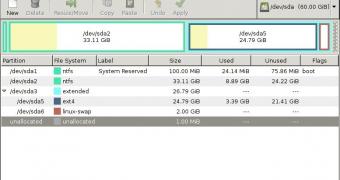 GParted, the open-source partition editor used by numerous Linux-based live systems to help users partition their disk drives before installing the OS, has been updated today to version 1.1.0.

Curtis Gedak released GParted 1.1.0, a maintenance update aiming to include enhancements, bug fixes, as well as translation updates. Highlights include the adoption of faster minfo and mdir to read FAT16 and FAT32 usage, and the ability to calculate the size of JFS partitions more accurately.

Moreover, this release adds support for recognizing ATARAID members, as well as to detect their busy status, and improves the moving of locked LUKS-encrypted partition. The xvfb-run dependency has been added and it’s required for the “make check” and “make distcheck” commands during compilation.

Of course, GParted 1.1.0 also addresses various issues reported by users or discovered by the development team since the last release. Among the bugs fixed, we can me… (read more)