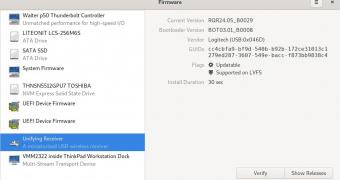 Just two weeks after its initial unveiling, the GNOME Firmware utility has been officially released as part of the GNOME 3.34 desktop environment series.

“GNOME Firmware is designed to be a not-installed-by-default power-user tool to investigate, upgrade, downgrade and re install firmware,” said Richard Hughes in a <a href="https://blogs.gnom… (read more)