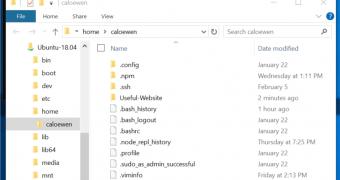 Microsoft’s Linux push in Windows 10 will continue with the release of the April 2019 update, also known as version 1903, and the company detailed some of the changes coming to users in a blog post.

One of the most important improvements is the addition of support for Linux files that can be accessed directly using File Explorer, which is the default file manager in Windows 10.

Right now, this option is part of Windows 10 build 18836, which is actually a preview build of the April 2020 Windows 10 feature update, but Microsoft says it’ll go live with version 1903 this spring.

Microsoft explains that the implementation is as simple as it could be. Just type explorer.exe in your favorite Linux distribution installed on Windows 10 with WSL and the command should open a File Explorer window with the Linux files available as part of a dedic… (read more)