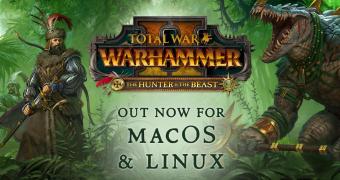 British video games publisher Feral Interactive announced the general availability of The Hunter & the Beast DLC for the Total War: WARHAMMER II video game for both Linux and macOS platforms.

Developed by Creative Assembly and published by SEGA, the Total War: WARHAMMER II was ported by Feral Interactive to the Linux and macOS platforms on November 20th, 2018. The game launched with the Mortal Empires DLC, as well as other free or paid DLCs that where released since the initial launch of the game back in October 2017.

The Hunter & the Beast is the latest Downloadable Content (DLC) for Total War: WARHAMMER II, bringing many new additions like two new Legendary Lords: Markus Wulfhart, who leads the Huntsmarshal’s Expedition (Empire), and Nakai The Wanderer, who leads the Spirit of the Jungle (Lizardmen). Both the new Legendary Lords come with their own faction mechanics, legendary items, quest-chains, campaig… (read more)