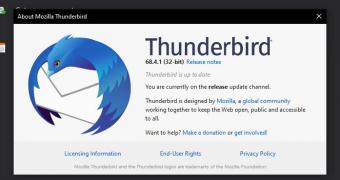 Mozilla has announced a new version of its email client for Windows, Linux, and mac, and in addition to the typical bug fixes and feature improvement, this one also brings changes for users running an older release.

Specifically, Mozilla Thunderbird 68.4.1 is offered as an automatic download for Thunderbird version 60 users, something that’s worth keeping in mind regardless of the platform you are running.

One important thing to keep in mind if you are running Thunderbird version 60 is that add-ons aren’t automatically updated when you install the new version. This is a known issue, Mozilla says, and the easiest way to deal with it is by allowing the add-ons to be updated duri… (