Hello everyone, how are you all doing today? You can now download Mailspring for Ubuntu but before that, I hope you are all having a great day so far. I was on a mini vacation for the past 4 days or so and It didn’t necessary end too well but let’s save that story for another day. I have an amazing free email app that most of you reading this will absolutely love. Please read on…

Today we will promote an awesome and actually free semi open-source app known as Mailspring. I doubt you have heard of it, it’s pretty new as it is a direct fork of the now defunct Nylas Mail. One of the core members of the Nylas Mail team decided to make a better a newer, faster and leaner free email client for Linux and Mailspring by all means, is just that. Let’s find out what else makes Mailspring a must download for you.

What Is Mailspring For Ubuntu?

Understanding your contacts and customers is the key to connecting with them. Mailspring provides the context you need with enriched contact profiles featuring bio info, social profiles, location info, and more.

Business happens in every language. Mailspring can translate messages written in English into Spanish, Russian, simplified Chinese, French, and German—right inside your draft.

Using a single inbox for all of your email accounts helps you get more done in less time. Mailspring supports every major mail provider—Gmail, iCloud, Office 365, Outlook.com, Yahoo!, and IMAP/SMTP—so you have a single, streamlined command center for all your messages.

Mailspring auto-detects the language you’re using and spell checks for that language. No settings changes necessary.

Typing common emails over and over is a drag—and when you send outreach that works, you want to reuse it. Mailspring’s quick reply templates let you create a library of customizable emails that are at your fingertips every time you send. 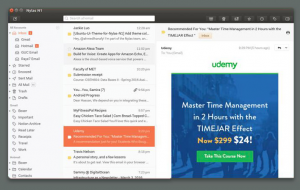 Other Linux apps: Zenkit for Ubuntu, Ardour for Ubuntu & Atom IDE for Ubuntu