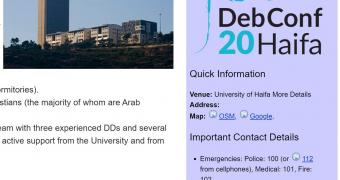 This year’s edition of DebConf, the Debian Project developer conference, will only take place online due to the global health issue, the organization announced this weekend.

Just like before, the DebConf20 will take place between August 23 and August 29, however, the team expects the event itself to be shorter than before, albeit they explain that everything depends on the proposals that it receives until the kickoff date.

This year’s edition of the conference was scheduled to take place in Haifa, so now the entire schedule is pushed back for one year. In other words, while the 2020 edition will happen online, the 2021 venue will take place in Haifa, followed by Kosovo in 2022 and Kochi, India in 2023.

“The DebConf team has had to take the hard decision that DebConf 20 cannot happen in-person, in Haifa, in August, as originally planned. This decision is based on the status of the venue in Haifa, the local team’s view of the local health situation, the existing tra… (read…