Vivaldi 3.4 Launched with New Features and a Small Surprise 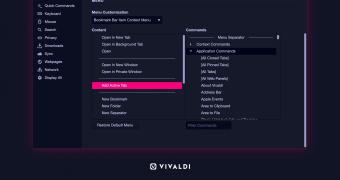 Vivaldi was, is, and will probably continue to be one of the best desktop browsers out there, with its Android version also improving at a pretty fast pace and new updates bringing plenty of goodies.

Today, the team working on Vivaldi announced version 3.4 on the desktop, and just as it happened before, the release is full of improvements.

First and foremost, one of the most notable additions is Vivaldia, a built-in game inspired by the Future Noir and CyberPunk and which is available today on Windows, Linux, Mac, Android, and Chromebooks. The arcade-style runner game also comes with gamepad support and can be launched from the Vivaldi menu or just by typing vivaldi://game in the address bar.

“In the face of adversity, Vivaldia grows strong and takes on the enemy. She fights to save the humans of the city,” Vivaldi explains.

“Riding her cybernetic ninja one-wheeler called the CyclePunk, Vivaldia outruns and outsmarts the big evil machines. At times, it looks like… (read…