Linus Torvalds Says He’s No Longer a Programmer: My Job Is to Say No 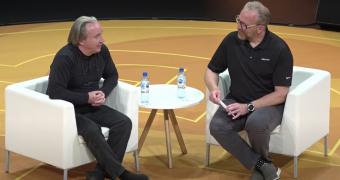 Linus Torvalds, often called the father of Linux, discussed his role as a kernel maintainer in a conversation with Dirk Hohndel, VMware’s vice president and chief open source officer, at the Open Source Summit and Embedded Linux Conference: Europe.

And while many people believe that Torvalds spends most of the time coding because, you know, this is what kernel updates are all about, this isn’t necessarily what he’s doing.

In fact, Torvalds reveals that he’s no longer coding at all, and he spends most of the time in the email app. This is also where he typically writes some code, but it’s not exactly what you think.

“I read email, I write email, I do no coding at all anymore,” he says.

“Most of the code I write, I actually write inside my mail reader. So somebody sends me a patch, or more commonly they send me a pull request or there’s a discussion about the next pull request, and there’s something I react to and say, ‘No, this is fine, but…’ And I send out…