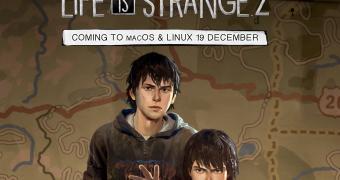 UK-based video games publisher Feral Interactive announced today that they plan to release the Linux and macOS port of the Life is Strange 2 video game on December 19th, 2019.

Developed by Dontnod Entertainment and published by Square Enix, Life Is Strange 2 is a single-player, episodic graphic adventure video game powered by Unreal Engine 4 and featuring a new location and cast of characters. It’s the second main instalment in the Life Is Strange series, released on September 2018 only for Microsoft Windows, PlayStation 4, and Xbox One platforms.

“On the run and sharing a terrible secret, brothers Sean and Daniel can rely only on each other in a world that has turned against them. With the police on their trail, they must keep moving onwards to Mexico. But the road is long and daunting, and relying on the kindness of strangers brings its own dangers,” said Feral Interactive.