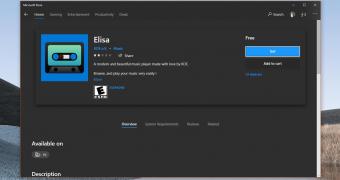 There was a time when Windows and Linux were considered fierce rivals and the two really couldn’t stand each other, but Windows 10 stepped in to change everything.

Not only that it’s now possible to run Linux on top of Windows 10, but a lot of Linux apps are also migrating to the world of Windows 10 for a cross-platform experience.

KDE applications are particularly popular on Windows 10, as several are already available from the Microsoft Store, and more recently, another big name landed on Microsoft’s operating system promising the same experience as on Linux.

Elisa, which is “a modern and beautiful music player made with love by KDE,” as the official description published in the store reads, is now up for grabs from the Microsoft Store, of course with a free license. The app is obviously open source, and it’s supposed to read pretty much any audio files on a Windows 10 device, just like its Linux sibling.