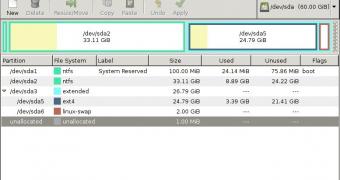 GParted (GNOME Partition Editor), the popular open-source and free partition editor software used by numerous GNU/Linux distributions, has reached the 1.0 milestone after being in development for nearly 15 years.

Developed in GTK (GNOME Toolkit) for more than 14 years, GParted is a graphical front-end to the GNU Parted open-source partition editing utility and the official partition editor app for the GNOME desktop environment. These days, almost all Linux-based operating system ship with GParted preinstalled.

Today, after nearly 15 years in development, GParted 1.0.0 was released as a major version featuring support for the F2FS file system to read disk usage, grow, and check, the ability to enable online resizing of extended partitions, better refreshing of NTFS file systems, and port to Gtkmm 3 (GTK+3) and GNOME 3 yelp-tools.

“With this major change we bump up the major version number. This 1.0.0 release is not meant to indicate that GParted is more stable or l… (read more)