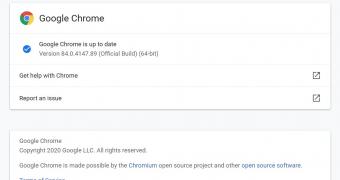 Google has recently released a new version of Chrome browser on all supported desktop platforms, and the changelog includes several security fixes, as well as improvements under the hood.

First and foremost, Google Chrome 84 packs no less than 38 security fixes, including for a critical heap buffer overflow bug in background fetch. The search giant says the issue was reported by Leecraso and Guang Gong of 360 Alpha Lab working with 360 BugCloud earlier this month.

There are no less than seven different security vulnerabilities with a high severity rating, and Google says it paid thousands of dollars in bounties to researchers who discovered them.

As for what’s new for the casual user, probably the biggest change happening in Chrome 84 is the new behavior that automatically mutes notifications from websites that are labeled as abusive. In other words, if you previously ended up on websites that bombarded you with notifications, this should no longer happen after in… (read more)