Canonical Under Fire for Putting Ads in the Ubuntu MOTD 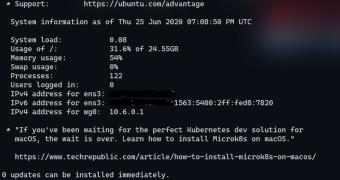 Ubuntu is often considered one of the best Linux distros for Windows users who are planning to make the switch, more or less because it offers a straightforward experience out of the box.

But as it turns out, users moving from Windows to Ubuntu might have another thing to deal with (and which they’re already familiar with): ads in the operating system.

A reddit thread that has already received more than a thousand of votes condemns Canonical for putting what are described as “ads” in the motd. A screenshot confirms that Ubuntu indeed tries to send users to a link, which is displayed alongside the following message:

“If you’ve been waiting for the perfect Kubernetes dev solution for macOS, the wait is over. Learn how to install Microk8s on macOS. https://news.softpedia.com/news/canonical-under-fire-for-putting-ads-in-the-ubuntu-motd-530372.shtml.”