XCOM 2: War of the Chosen – Tactical Legacy Pack DLC Out Now for Linux and macOS 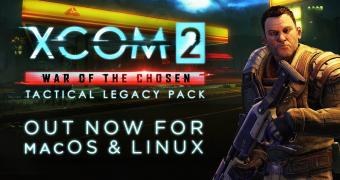 It also adds new soundtrack options, new weapons and armor, a total of 28 new maps, including remastered maps and scenes from XCOM: Enemy Within and XCOM: Enemy Unknown, as well as new customization and Photobooth options to equip your soldiers with new helmets and attitudes.