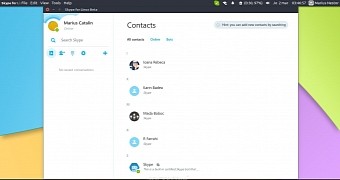 Microsoft announced that Skype 5.0 for Linux has entered Beta stages of development after being in Alpha for more than eight months, during which it received numerous builds that users were able to take for a test drive.

As you can see, not only that status of the application was changed from Alpha to Beta, which means that it should be more stable and reliable, but also the version number. Skype’s version scheme was bumped to build 5.0 from 1.x, showing Microsoft’s commitment to offer Linux users a modern VoIP client that’s feature rich and on par with the Android, iOS, Mac, and Windows builds.

“Since the launch of Skype for Linux Alpha a few months ago, we have been focused on building a new experience that is in line with Skype’s ongoing transition from peer-to-peer to a modern cloud architecture,” reads the announcement. “We want to create a Linux version of Skype t… (read more)
Remember to like our facebook and our twitter @ubuntufree for a chance to win a free Ubuntu laptop by Dell or HP!