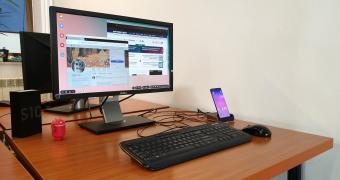 Samsung’s ambitious project to bring a full version of Ubuntu to its smartphones has been canceled, and the upcoming debut of Android 10 will remove even the existing beta versions currently up for testing.

Back in 2018, the South Korean smartphone manufacturer decided to push things to the next level with its DeX project and enable a full version of Linux on top of Android.

Samsung DeX is a special feature that allows flagships like the Galaxy S and Note to connect to larger screens using dedicated hardware and boost the productivity side of Android with mouse and keyboard support. Technically, Samsung DeX allows an Android phone to become an almost fully-featured PC that is connected to a bigger screen. A PC running Android, that is.

Last year, however, Samsung started a collaboration with Canonical, the makers of Ubuntu, to bring this Linux distro to DeX, essentially enabling Linux to run on Galaxy S and Note phones.

Linux on DeX no more