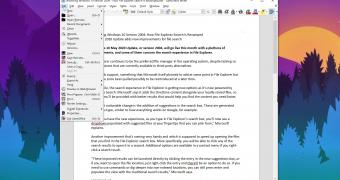 The Document Foundation has released a new version of the LibreOffice productivity suite on all supported desktop platforms.

LibreOffice 6.4.4 is the fourth release that’s part of version 6.4, and naturally, it doesn’t introduce any new features but is supposed to further polish the experience with the app and resolve some of the bugs that’ve been discovered lately.

TDF says this new version is specifically “targeted at technology enthusiasts and power users,” as everyone else should stick with LibreOffice 6.3.6 for a more stable and reliable experience. This is because this older version of the software has already received major improvements and it’s now considered the recommended download for everyone interested in extra stability.

“LibreOffice 6.4.4 represents the bleeding edge in term of features for open source office suites, and as such is not optimized for enterprise-class deployments, where features are less important than robustness. Users wanting a…