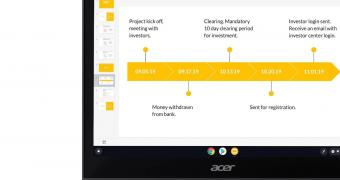 The world of dual-screen devices will definitely expand beyond Android and Windows, and of course, Apple will certainly join this evolving trend at some point in the near future.

Undoubtedly, Google doesn’t want to be left behind either, so the Mountain View-based search giant has already started the work on a dual-screen Chromebook, according to a recent report.

Featuring two separate touchscreens, this Chromebook prototype is codenamed “Palkia” and is supposed to be a direct rival to dual-screen Windows devices, including Microsoft’s very own Surface Neo powered by Windows 10X.

On the other hand, Palkia is still in its very early days, and for the time being, it’s just a concept with very small chances to make it behind this stage.

For now, however, there’s a lot we don’t know about this mysterious Google Chromeboo… (read more)