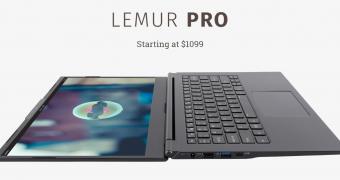 The world of Linux laptops is slowly but surely expanding, and today the engineers over at System76 announced a new model that is projected to see daylight in early April.

Called Lemur Pro, the new Linux laptop is specifically supposed to impress with its battery life, and according to System76, it really does, as it lets you “watch all of Lord of the Rings in 10 hours” or “write code in VIM for 21 hours straight.” All without plugging in, of course.

The new Lemur Pro laptop come with a choice of two processors, both of them part of the 10th Gen Intel Core lineup. So customers can choose between the i5-10210U and the i7-10510U, with the latter obviously being the more powerful (and more expensive) version.

Laptop scheduled to go on sale next month

Regardless of the processor, you get Intel UHD graphics and up to 40GB DDR4 memory. There are two M.2 SSDs with a maximum of 4TB of storage.