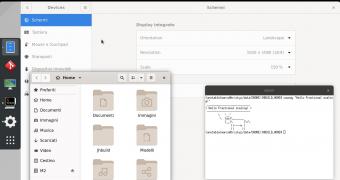 The GNOME Project revealed the fact that the forthcoming GNOME 3.32 desktop environment will feature fractional scaling for HiDPI/4K displays, implemented in the GNOME Shell and Mutter components.

Support for HiDPI monitors was available in GNOME for a while now, but it’s limited to scaling windows by integral factors like 2, and most modern displays are between these DPI ranges. Fractional scaling will allow windows scaling by fractional values, such as 3/2 or 2/1.3333 to make them look better on HiDPI/4K displays.

GNOME/Ubuntu developer Marco Trevisan reports on the fractional scaling feature for the GNOME 3.32 desktop environment, which was in the works for some years now, saying the relevant proposals have been prepared for implementation in the GNOME Shell and Mutter components for the upcoming GNOME 3.32 release next week.

“We started this work some years ago (ouch!) and lead to an Hackfest in Taipei, but in between other work to do and priorities which caus… (read more)