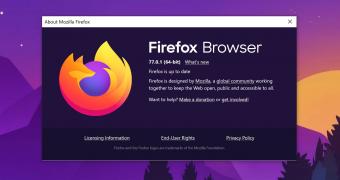 Mozilla has just released a new version of Firefox for all supported desktop platforms, only a few days after the company officially rolled out Firefox 77.

The new build is Firefox 77.0.1, and it comes with single fix that concerns DNS over HTTPS. The changelog explains the following:

“Disabled automatic selection of DNS over HTTPS providers during a test to enable wider deployment in a more controlled way.”

Mozilla further discusses the issue on a report published on Bugzilla, where the company explains that the release of DNS over HTTPS might cause issues for some providers, including for NextDNS.

“We need to be able to roll this out gradually so that we don’t overload any providers. Even the dry-run involves up to 10 requests per client which can be very significant when the entire release population updates,” an engineer explains.